Every Babies4Babies blanket gives 4 life saving antiseptic treatments called Chlorhexidine to 4 babies in the developing world. This is because most babies actually aren't born in sterile environments and a simple umbilical cord infection can be deadly for a newborn.

Sometimes hearing it from the experts helps, so here's an article we were really excited to read. Via The Guardian.

An antiseptic gel to help prevent umbilical cord infections in newborn babies, which was developed from a mouthwash, has been given the green light by European regulators.

GlaxoSmithKline developed the product, called Umbipro, with the charity Save the Children for use in developing countries. The gel will be sold at a not-for-profit price and could save 422,000 lives over five years, according to UN estimates. 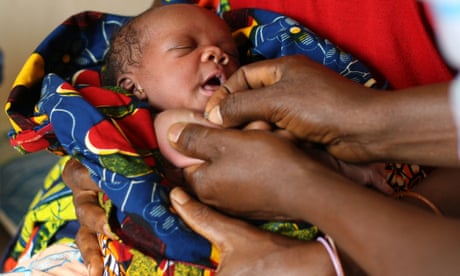 Scientists reformulated the chlorhexidine solution found in its Corsodyl mouthwash into a gel that can be applied to newly cut umbilical cords. There is a greater risk of infection – a major cause of newborn deaths – in developing countries across Asia and sub-Saharan Africa, where more births happen at home and unsterile materials such as dung and ash are traditionally used on the umbilical cord stump.

The antiseptic gel was endorsed by the European Medicines Agency on Friday, an important step in getting it to developing countries. It will need to be approved by local regulators. GSK said it would submit applications in countries with moderate to high neonatal mortality rates.

Once approved, the company plans to initially produce about 6m units, packaged in single-use foil sachets that can be opened without scissors. The UK drugmaker said it would also share its manufacturing knowledge with other companies interested in making the gel.

Patrick Vallance, who runs GSK’s pharmaceuticals research and development department, said the gel proved the value of collaboration between makers of pharmaceuticals and over-the-counter healthcare products such as toothpaste and mouthwash.

The idea for the gel was triggered by a UN commission report in 2012 that identified chlorhexidine as an overlooked treatment which could potentially save 422,000 neonatal lives over five years.

Comments will be approved before showing up.